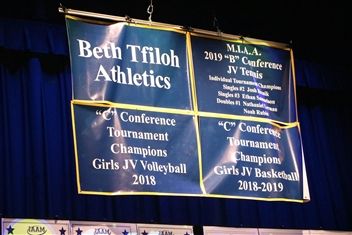 6/3/2019
BT celebrated the achievements of our student-athletes who have worked so hard representing Beth Tfiloh athletics throughout this school year.
IAAM Character coins
All of our girls’ high school teams compete in the interscholastic athletic association of Maryland, or IAAM. At the beginning of each season, each Girls Varsity Head Coach receives two IAAM Character Coins. Coaches have the opportunity to present Character Coins to two opposing players during the season. These are players who display significant elements of fair play, integrity and respect. We are proud to recognize the following girls who were presented with CHARACTER COINS this season:
All-Conference Selections
Weiner Tournament All-Stars
McCormick Unsung Hero Awards: Toby B. ‘19 and Ryan R. ‘19.
For the first time Beth Tfiloh nominated athletes for the McCormick Unsung Hero award. These nominees makes substantial contributions to the team that do not translate into statistics or earn recognition in any other form. Unsung Heroes sometimes deal with hardships. As related to this award, hardships should pertain to issues that must be overcome or dealt with to be a member of the team. The main drivers of an Unsung Hero are character traits that include but are not limited to dedication, kindness, commitment, reliability, enthusiasm, positive attitude, respect, and unselfish behavior.

Team Award Recognitions
Congratulations to the three BT teams that earned banners this year:
Student Athletic Service Awards: Benny K. ‘19, Ari R. ‘19 and Rebecca G. ‘19
This award goes to three individuals for being active in the Weiner tournament, team activities, Sunday sports, and managing multiple teams. These students have positively influenced everyone around them.

Gav L. ’19 broke the school record by making 132 three pointers. According to MaxPreps he ranks 19th in the country and #1 in the state of MD in made 3’s. It’s also the most 3’s made in the state since 2014-15. He was also selected all conference and made 2nd team all-tournament for the Weiner tournament.
Girls Varsity Indoor Soccer, Coach: Brendan Kennedy
Girls Varsity Swimming, Coach: Julianna Randazzo
Boys Varsity Swimming, Coach: Julianna Randazzo
Girls Varsity Lacrosse, Coach: Tracey Roman
Boys Varsity Lacrosse, Gary Pedroni / Ed Gold
Boys JV Tennis, Coach: AJ Bingaman
Boys Varsity Tennis, Coach: Millad Sajjad
Girls Varsity Track, Coach: Sonya Howell
Boys JV Track, Coach: Sonya Howell
Boys Varsity Track, Coach: Sonya Howell
Varsity Golf, Coach: Joe Ciattei
Boys Varsity Baseball, Coach: Ari Braun
Girls Varsity Softball, Coach: Stacey Hachenberg
Tri-Sport Athlete Award
It takes a special student-athlete to play three sports throughout high school in addition to all their other responsibilities. We would like to give a special award to 11 SENIORS at BETH TFILOH who played three sports all four years: Toby B. ’19, Jacob B. ’19, Jeremy G. ’19, Hailey G. ’19, Meira K. ’19, Jack L. ’19, Jenna L-B ’19, Eitan M. ’19, Ryan R. ’19, Ariella S. ’19, and Justin T. ‘10
2019 Senior Scholar Athlete Award
These students have distinguished themselves as one of the most outstanding students in their class while earning recognition as an outstanding athlete as well: Jacob B. ’19, Josh F. ’19, Sage F. ’19, Meira K. ’19, Zach V. ’19 and Acey V. ‘19
Athlete of the Year Awards
Female Athlete of the Year: Eden H. ‘19
Eden is a three-sport athlete who was on the Varsity Tennis, Basketball and Track teams. She was an individual finalist in Girls’ Varsity Tennis, and an award winner for all three teams she played on. She is a dedicated, hardworking team leader!
Male Athlete of the Year: Jack L. ‘19
Jack competed on Varsity Cross Country, Varsity Swimming and Varsity Track and Field. He was all-conference in Cross Country and now holds Beth Tfiloh’s school record in the 100 Meter Back Stroke. He also qualified for the MIAA championship meet in track and was an award winner for all three teams he played on.

Russel Athletic Awards
The Russel Athletic Award honors the most outstanding athletes who exhibited excellence in athletics, leadership, and character over their FOUR years as a Beth Tfiloh athlete.
Female Russel Athletic Award Winner: Meira K. ’19
Meira has been an outstanding three sport athlete throughout her Beth Tfiloh athletic career. She competed on Varsity Cross Country, Varsity Swimming, and Varsity Track and Field during her four years at Beth Tfiloh. Meira received MVP in each one of her sports. She also received the senior scholar award as well as the tri-athlete. Her enthusiasm and positive work ethic has made her a role model for all her teammates. She finished 3rd at conference championships in the women’s 100 Breast Stroke and was the 2018 Female Athlete of the Year. Meira carries herself at all times in a manner which represents Beth Tfiloh in the best way possible. I am proud to honor her as one Beth Tfiloh’s best student-athletes.