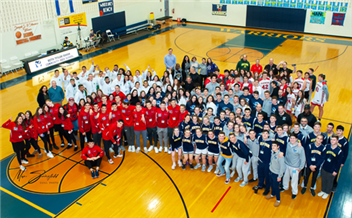 The 33rd annual Weiner Tournament was full of excitement!
In the Girls’ Round Robin, Beth Tfiloh and HAFTR both started the tournament 3-0, setting the stage for an exciting Thursday afternoon game. BT staged a late comeback and snatched a 38-36 win with seconds to spare! The Warriors would complete the round robin with a 5-0 record and the top seed, but fourth seeded Yavneh Academy played their best game of the tournament to earn a 41-40 upset win in the semifinals. HAFTR held off three-time defending champions TanenbaumCHAT by the score of 52-32 in the other semifinal. On Saturday night, Boyar reversed a loss from day 1 of the tournament with a 42-27 win over HANC to earn 5th place. In the 3rd place game, BT bounced back from the disappointment of the semifinals with an outstanding performance, defeating CHAT 49-26 for 3rd place. In the championship game, HAFTR played exceptional basketball and defeated Yavneh 51-35. The win marked the first girls’ title in HAFTR’s long history at the Weiner Tournament.

On the Boys’ side of the tournament, BT won an exciting opening game against TanenbaumCHAT by the score of 37-36. As the tournament progressed, CHAT repeatedly found themselves in close games, falling by just 4 to Yavneh and earning wins against HANC, Boyar, and HAFTR by a combined 12 points. Those three wins were enough to earn CHAT the #3 seed in the semifinals, and Boyar finished at 2-3 for the last semifinal spot. HAFTR and Yavneh both finished 4-1 to claim the top seeds. HAFTR elevated their play in the knockout rounds, beginning with a 59-41 win over Boyar in the semifinals, while Yavneh won their semifinal over CHAT, 52-44. On Saturday night, HANC took 5th place with a 45-37 win over BT. In the 3rd place game, Boyar played one of their best games, topping CHAT 48-27. In the championship game, HAFTR made it a clean sweep, defeating Yavneh 54-33 and earning their second straight championship in the boys’ tournament.

Congratulations to the HAFTR Hawks on their impressive double championship! Can’t wait ‘til next year!