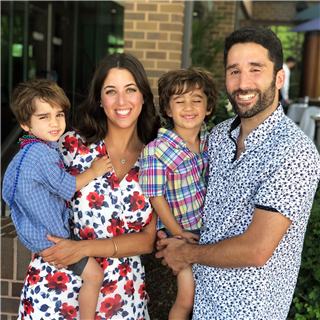 7/23/2019
Meet Vicki and Jesse Hervitz and their sons, Marco and Joah.
Vicki (Roffe) Hervitz ’05 and Jesse Hervitz ’04 are one of 25 Beth Tfiloh Dahan Community School alumni couples. Vicki, a BT “lifer,” attended BT School since kindergarten, grew up in the Congregation, and now works in the PreSchool as a guidance counselor.

Jesse, a Harrisburg, PA native who works as an attorney at Venable LLP, fell in love with BT when he toured the school in eighth grade. “I made the decision then and there to join the other Harrisburg student commuters in their daily trek down I-83 and haven’t looked back since,” shares Jesse. Today, the Hervitzes are a BT Dorot family — alumni whose children Marco ‘33 and Joah '35, attend BT PreSchool.
Becoming BT Synagogue members was a “natural choice,” according to Vicki. “Growing up, BT was a home away from home for both of us, instilling a commitment to Jewish values and that we now wish to share with our children,” Jesse says.
He adds, “We are thrilled that our boys will have the chance to experience so many of the same personally fulfilling and religiously enriching childhood experiences that we were so fortunate to have ourselves.”
Back