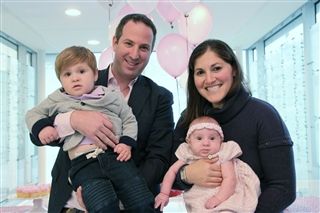 “We have met a lot of great people since moving here and are very happy we made the decision to move—even though we did enjoy living down in the city,” says Courtney. The move provided their 2 year-old son, Ethan, who started in BT PreSchool’s 2’s program this fall, with many more playdate opportunities and kid-friendly activities. “We wanted more of a Jewish community than we had downtown,” she adds.

Ezra owns and runs a general contracting company that operates mostly in Washington DC, building high-end multi-family apartments and condominiums. Courtney also works for the company managing the bookkeeping, running the HR department, and “doing whatever else is needed!” An LCSW-C, Courtney has also spent the past 10 years providing outpatient mental health care.

Courtney notes that among Ethan’s many talents is soccer, which he started playing shortly after learning to walk at nine months. “He is quite good—and it seems he is left-footed, which is something that does not run in our family.” Their baby, 3 month-old Kira, is Ethan’s biggest fan, watching his every move. Her special talent? “Her ability to stay up all day long!” laughs Courtney.

Family fun for the Hercenbergs includes spending time at the beach and pool, and taking family walks. They also enjoy coming to BT on Shabbat, attending the services, and going to the Cookie Minyan.

“BT is a nice community—even with a big congregation, it has a personal feel to it,” Courtney shares. “Within 12 hours of giving birth to Kira, I had a message from two of BT’s rabbis as well as [BT School Director of Education] Dr. Schorr, all congratulating us on Kira’s birth.” The Hercenbergs were touched by the many BT shul and staff members who delivered meals and presents to their family in the weeks preceding Kira’s birth. “It felt very nice to be welcomed into this community in such a way, and is something that I think would be hard to find in other communities.”
Back