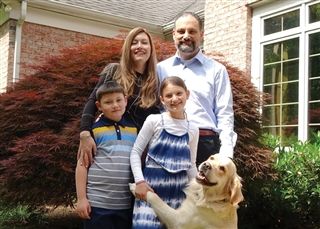 6/20/2019
Meet Tzipie and Larry Moss, and their children Aidee and Barry.
When a Brooklyn woman and a Portland, Maine man meet at Sinai, where else could they possibly end up but at Beth Tfiloh?

Tzipie and Larry Moss met on SawYouAtSinai.com, a Jewish dating website. Larry had moved to Baltimore two years earlier, both for professional opportunities and its large Jewish community. Tzipie relocated to be with her beshert.

Today, Tzipie is a dentist and president of Smile Forever Dentistry, a multi-specialty dental practice that resulted from the merger of several existing dental practices into one state-of-the-art location. Larry is Smile Forever Dentistry’s vice president, where he focuses on mergers and acquisitions, in addition to serving as the regional medical director and clinical neuro-radiologist for Envision Physicians Services.

The Mosses’ children attend Beth Tfiloh Dahan Community School — 10-year-old Aidee, who just completed fourth grade, and seven-year-old Baruch (Barry), who completed 2nd grade. Tzipie notes that their two-year-old dog Sam would love to attend BT’s Mommy and Me classes, but regrettably has been declined due to “species segregation.”

The Mosses’ first BT connection was through the PreSchool, which they chose because of “the warm environment, caring teachers and high standards,” Tzipie said. While both Judaic and general studies were important to them, the single most important factor was how happy the children looked when they visited. And since Aidee had such a great experience at BT’s PreSchool, selecting a lower school for her, and a preschool for Barry, was an obvious choice.

The Mosses started attending BT shul services at Aidee’s urging, because her teacher, Morah Terry Alpert, and her friends went there. At the time they lived 2.5 miles away from BT. As a Shabbat observant family, they made the hour-long trek each way for Alana Gordon ‘18’s Bat Mitzvah, but they didn’t think it was realistic to attend Shabbat services regularly at BT. Thankfully, Aidee was persistent.

“Our goal is always to make our children happy, and to make sure they value being Jewish including valuing Shabbos,” said Tzipie. They began to make the walk more frequently. The more they came to shul, the more the Mosses fell in love with Beth Tfiloh Congregation — from the warm and friendly environment, and the “active focus on the children and the children's programming,” to Rabbi Wohlberg's inspiring sermons and leadership. They also appreciate Hazzan Albrecht's beautiful singing which “enhances our kavanah (concentration)…and elevates Yom Tov davening,” especially his Neilah service, which is a “definite highlight.”

Beth Tfiloh’s kid-friendly environment offers Shabbat experiences that appeal to their children’s unique personalities. While Aidee enjoys both the formal and informal children's groups, Barry generally prefers participating in the Dahan Sanctuary service. However, “Both children love going up to Rabbi Wohlberg for candy,” Tzipie reports.

The Mosses also appreciate the continuity between the school and shul environment that encompasses friendships, relationships with teachers, and institutional leadership. The school’s inter-divisional connection carries over to the shul experience and impacts the children. That connection “creates a very warm environment as the kids go on to the next grade each year,” both in school and shul.

Recently, the Moss family relocated to the Enclave neighborhood just up the street from Beth Tfiloh, with help from several fellow BT members: the Imanoel family, who notified them of the home going on the market; their agent, Eva Katznelson; and real estate lawyer Dino La Fiandra, who helped them with the closing.

“After spending so many years making such an effort to go to BT shul, it was the BT community who helped us get to our current location, and we are now finally home, home at BT!” shared Tzipie. “We are so excited about all the guests we have hosted in our new home these past four months, and look forward to the guests we will be hosting for the BT community in the months and years to come.”
Back